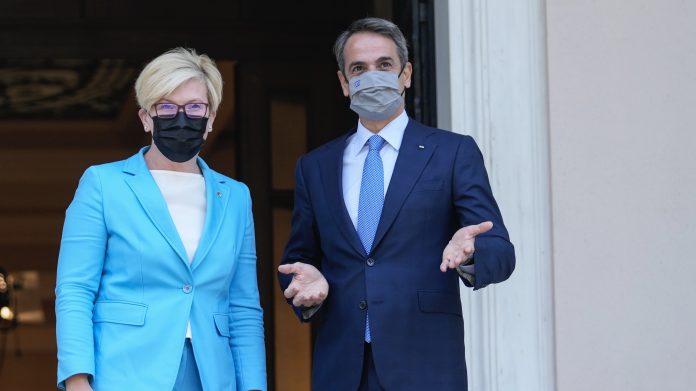 Both leaders suggest that their influx of asylum seekers is being orchestrated by Belarusian President Alexander Lukashenko in an effort to exert political pressure.

“What Belarus is doing is simply unacceptable,” Mitsotakis said.

Mitsotakis says both countries “are characterised by persistent migratory flows, coupled occasionally by an orchestrated effort by a third country to exert political pressure on the European Union through migration as a tool for the projection of geopolitical power.”

“Neither Greece in the south, nor Lithuania in the north wish to be the gateway to Europe for people-smuggling networks or third-party states intent on putting pressure on the European Union,” he said.

“Lithuania is not a corridor, is not a track towards the European Union, towards Sweden, Germany or other countries,” Lithuanian President Simonyte said.

She’s reported as saying that Belarus was not an unsafe country unless you oppose its  government and that many asylum applications to the country will likely be rejected.

More than 1,700 people have crossed the border into Lithuania this year, including 1,100 in July alone.

“The total number might not seem very frightening but what is frightening is the trend,” Simonyte said, adding that more than 20 times more people had entered than in previous years.

Greece has been grappling with a surge in boat arrivals for years and have been accused of carrying out illegal summary deportations.

Greek Prime Minister Mitsotakis denies the accusations and other government officials label them as ‘fake news’.