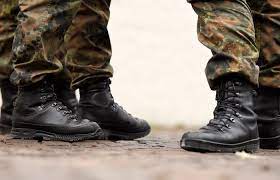 German defense officials tried to cover up an internal scandal involving antisemitic and far right provocations that is currently rocking the country’s armed forces, the Süddeutsche Zeitung (SZ) newspaper has alleged.On Wednesday, a furious Annegret Kramp-Karrenbauer, Germany’s Defense Minister, confirmed that an entire infantry platoon of 30 soldiers had been withdrawn from Lithuania, where they had been serving with a NATO mission to the Baltic republic. A party organized by the soldiers at a provincial hotel had featured antisemitic and racist songs, including a birthday tribute to Adolf Hitler, later degenerating into reports of violence and drunken sexual assaults.

“The misconduct of some soldiers in Lithuania is a slap in the face of all those who serve the security of our country day after day in the Bundeswehr,” Kramp-Karrenbauer declared on Twitter. Any soldiers found guilty would be “punished with the utmost severity,” she said.

According to the SZ, however, army chiefs initially tried to prevent the scandal from being publicized. While the party took place on April 30, the incident was not officially reported until June 8, the paper said on Wednesday. “According to SZ’s sources, the defense ministry is now investigating indications that superiors tried to settle the incident ‘internally,’ i.e. outside the reporting channel,” it said.

The same paper quoted “top defense ministry officials” acknowledging that the party was not a “singular event,” and that the same platoon had previously attracted concern over its antisemitic and extremist tendencies.

The April 30 party took place at a hotel in the town of Rukla, in central Lithuania, while the soldiers were on a “recreational weekend.” Copious amounts of alcohol were consumed as they sang racist and antisemitic songs — including the tribute to Hitler, whose birthday falls on April 20 and is celebrated in neo-Nazi and white supremacist circles — and raged against “Jews and traitors.”

The group also engaged in what one news outlet described as “bizarre sex games,” with some soldiers who were too drunk to resist allegedly subjected to sexual assaults by their comrades.

The soldiers were subsequently accused of “giving offense with racist and antisemitic overtones and showing extremist behavior,” a military spokesperson told broadcaster DW.

“Such behavior is not only inexcusable but brings shame on us all,” she added.

Rebuilt and trained by the Allied Powers after World War II, Germany’s armed forces operate a strict ban on far-right activity that has been challenged on several occasions in recent years. Most recently, the elite KSK commando force was partially disbanded after 20 of its members were arrested for right-wing extremism in June 2020. In a separate report in 2019, military intelligence warned that there were approximately 600 supporters of far right groups serving in the German armed forces.

The platoon in Lithuania had been serving with NATO’s “Enhanced Forward Presence” mission designed to deter Russian military aggression. The Bundeswehr leads the Lithuanian element of the mission, which also includes NATO units stationed in Estonia, Latvia and Poland.