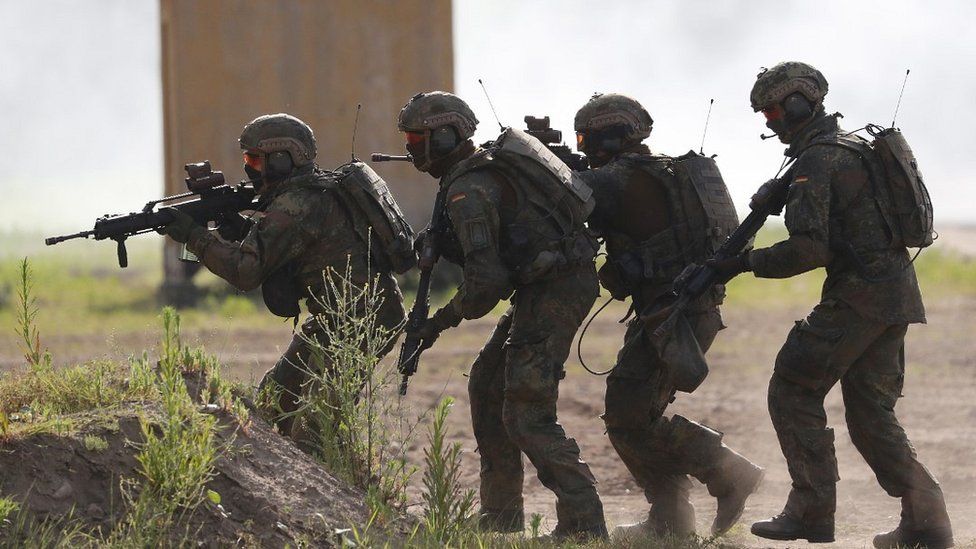 The German defence minister has told the armed forces that reported racist and sexual abuse in a German platoon based in Lithuania has put their entire reputation at risk.
The 30 soldiers have now been recalled. Annegret Kramp-Karrenbauer said the scandal was a “slap in the face” for all those serving in the Bundeswehr (armed forces).
The reports spoke of a sexual assault, bullying, anti-Semitism and Nazi songs.
The platoon was part of a Nato mission.
“Through their behaviour these soldiers frivolously put the whole Bundeswehr’s reputation at risk,” she said, addressing a Bundeswehr officers’ academy in Hamburg.
The allegations, first reported by Der Spiegel news, relate to a party held at a hotel in Lithuania at the end of April.

Members of the platoon allegedly filmed an incident of sexual assault against another soldier and sang anti-Semitic songs. Later more allegations emerged of sexual and racial abuse in the platoon, including soldiers singing a song to mark Adolf Hitler’s birthday on 20 April.
Ms Kramp-Karrenbauer said “these misdeeds will be severely prosecuted and punished, as far as expelling those responsible from the Bundeswehr”.

The platoon was part of Nato’s “Enhanced Forward Presence”, a mission which trains local soldiers in the three Baltic states and Poland as a deterrent against Russian aggression. There are 620 German troops in Lithuania, leading a Nato battlegroup.

The minister said the abuses were undermining the Bundeswehr at a time when it needed funding for new equipment and challenges such as combating Russian disinformation.
She told the officers that their job was to be “the armour that ensures democratic stability”, and they were the “first line of defence against extremist activities”.
Is there a pattern of far-right extremism in the army?
German media report that far-right abuses among the Lithuania-based troops had already surfaced last year.

In one case, a soldier allegedly racially abused a non-white fellow soldier.
In another case, four German soldiers smoking outside a Lithuanian barracks made animal noises when a black French soldier walked past.
The cases were reported by the government, answering a question from left-wing Linke MP Ulla Jelpke. None of the alleged offenders has been punished yet.
The last big scandal came last year, when far-right incidents in the elite KSK commando unit triggered calls for it to be disbanded.
But Ms Kramp-Karrenbauer said reforms, started after the scandal erupted, were yielding results, so she would let the unit survive.
A year ago she ordered part of the KSK to be disbanded, saying it had become partly independent of the chain of command. Earlier police had seized explosives and weapons at the home of a KSK soldier.

And in January 2020, military intelligence said there were almost 600 suspected far-right supporters in the army. They said the KSK was seen as a particular problem, with 20 members suspected of right-wing extremism.
The unit was founded in 1996, and has some 1,000 soldiers trained for crisis situations such as freeing hostages abroad.
In 2017 inspections were ordered on all military barracks when Nazi-era memorabilia was found at two of them. Many of those suspected of far-right links are thought to be sympathetic to anti-immigration Alternative for Germany (AfD), the main opposition party.