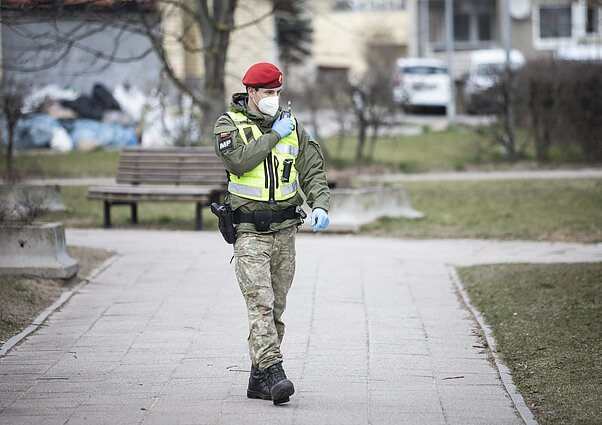 Social media in Lithuania has been abuzz with posts alleging that a new law allows the military police to forcibly enter homes to vaccinate people. But the law traces its roots to the war in Donbass.

The recently  passed law was actually drafted in 2014 partly in response to the conflict in Ukraine, making sure that the country’s military police are not paralysed if attacked under unclear circumstances, as it happened in Crimea and Donbass.

“The law changes were brewing for a long time” and Ukraine was among the reasons, Captain Eglė Stankevičiūtė, press officer of the Lithuanian Military Police, told LRT.lt.

The new law expands the prerogatives of the military police to respond to criminal acts being committed against “the country’s defence system”.

According to Lithuanian officials, the law also clears up other legal ambiguities, like whether the military police could enter private property to detain a person who has, for example, stolen equipment from military barracks.

With the growing number of NATO troops in the country, the military police have been on escort duties on civilian territory, which needed updated legislation, according to officials.

Additionally, “the multinational NATO battalion led by Germany is deployed in Lithuania, [and as] the troops are constantly rotating, we have to ensure their safety, as well as order and discipline”, said Stankevičiūtė.

But social media posts spread during the quarantine in Lithuania alleged that the pandemic and the new law were related.

The posts alleged that the military police will be able to break into private homes to forcefully vaccinate people from Covid-19 and will also take over the functions of the civilian police from January.

On Monday, the Lithuanian Defence Ministry dismissed the claims, calling them fake news.

“The aim is to intimidate the public,” the ministry said in a statement, adding that “other misinformation is also being spread”.

The statement comes days after Lithuania suffered the biggest and most complex cyber attack in years,  according to Defense Minister Arvydas Anušauskas.

Over 20 websites belonging to Lithuanian institutions were hacked to spread fake news reports.