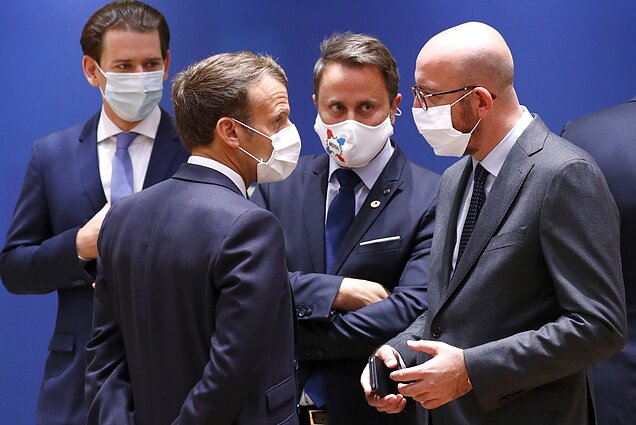 The European Council president has proposed reducing the grants for coronavirus-hit countries that are part of the economic recovery fund.

On Monday morning, European Council President Charles Michel told EU leaders that he would put forward a proposal to reduce the grant part to 390 billion euros and announced a break in negotiations, according to diplomatic sources.

“Rutte and Kurz remain against everyone else,” a well-informed diplomat told BNS early on Monday. He spoke anonymously due to the sensitivity of the matter.

The recovery fund would be created on the basis of borrowing funds from the international markets. But the Dutch and Austrian governments do not want to share the burden of borrowing without imposing strict spending conditions on countries like Spain and Italy that they consider to be less frugal.

The majority of other leaders say the EU has to demonstrate solidarity in the face of the coronavirus crisis.

Preliminary calculations show that under the initial proposal, Lithuania could receive around 2.5 billion euros in grants and ask for additional loans worth around 2 billion euros. If the recovery fund is reduced, Lithuania’s share would probably be smaller.

Lithuanian President Gitanas Nausėda said ahead of the decisive round of talks that the EU funding for agriculture remained the Baltic states‘ priority, as they aim for the direct payments to farmers to get closer to the EU average.

“There are funds we will not agree to be cut and for that reason, even if it happens, we will have counter-proposals that are, first of all, related to bigger agricultural support,” Nausėda said.

Diplomats hope Michel will present an updated proposal on the recovery fund’s distribution criteria and the separate 2021–2027 EU budget worth over 1 trillion euros on Monday afternoon. The new plenary session should start no earlier than 17:00 Lithuanian time (16:00 Brussels time). The negotiations in Brussels have been taking place since Friday.