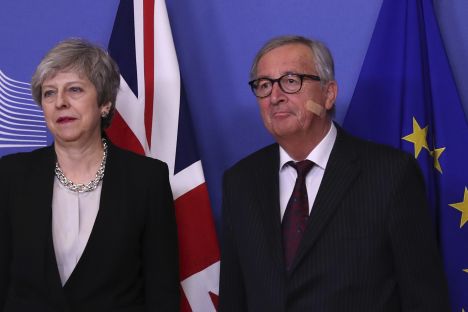 Following three British MPs leaving the ruling Conservative Party amid Brexit impasse, British head of government held more talks with the European Union that were constructive according to both Pirme Minister Theresa May and European Commission President Jean-Claude Juncker.

American news agency AP reports that no breakthrough on United Kingdom’s demands over legally-binding changes to the so-called Irish backstop was announced from the dinner meeting at EU headquarters held on Wednesday, February 20, in Brussels between May and European Commission President Jean-Claude Juncker.

At the same time, a joint communique from the two promised their respective negotiating teams «would continue to explore the options in a positive spirit.» and the two leaders would have another meeting before the end of the month.

May commented in a press conference: «We’ve made progress. (..) Time is of the essence, and it’s in both our interests that when the U.K. leaves the EU, it does so in an orderly way».

Meawhile, the British government suffered a blow in London, where three Conservative Party legislators left the party faction over her handling of the Brexit negotiations. The MP’s have decided to join a new centrist group.