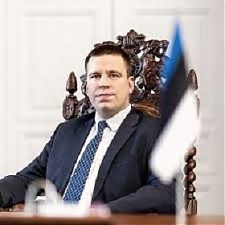 Commenting on an e-mail sent to him by Guy Verhofstadt, the leader of the Alliance of Liberals and Democrats for Europe group (ALDE) in the European Parliament, leader of the Center Party and outgoing prime minister of Estonia Juri Ratas said that the government coalitions of EU member states are not determined in Brussels, informed LETA./BNS.

“It’s not Brussels that determines coalitions, the division of power is determined by the bearer of supreme power,” Ratas said in his response to a question about the e-mail at the government press conference on Thursday.

Ratas said that he hasn’t responded to the mail, but will definitely do it.

In the e-mail, Verhofstadt implored Ratas not to form a coalition with EKRE, which the former Belgian prime minister called “an extreme right-wing political party which resembles European fascist regimes,” according to Politico magazine.