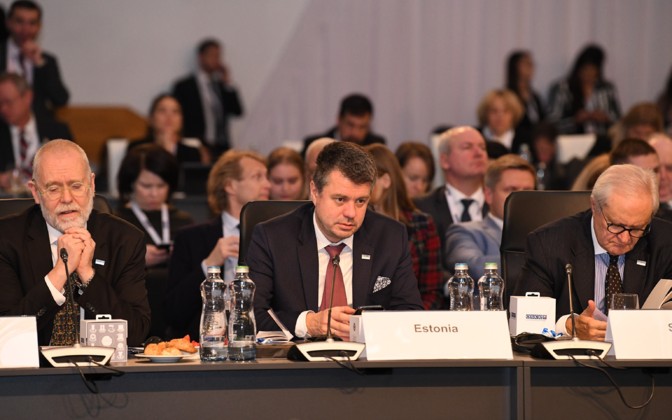 Violation of international law and continued international crises threatened the security of the OSCE region and are harmful to mutual trust, foreign minister Urmas Reinsalu said on Thursday while talking about Georgia and Ukraine.

Reinsalu was speaking at the 26th meeting of the Ministerial Council of the Organization for Security and Cooperation in Europe (OSCE) in Bratislava, Slovakia.

“Estonia completely supports the sovereignty and territorial integrity of Ukraine and Georgia,” Reinsalu said, expressing concern over the violation of fundamental rights and the deteriorating human rights situation in occupied territories.

As an example, he talked about how people in occupied Abkhazia and South Ossetia were denied fundamental rights such as medical assistance, saying people cannot get adequate treatment in local hospitals but the de facto authorities do not allow them to seek medical treatment in territories under the control of the Georgian government.

In his speech to the ministerial council, Reinsalu called on Russia to cease its interference, aggression and human rights violations, and comply with international norms and commitments. “All OSCE member states must follow agreed rules, international law and the Helsinki principles,” the Foreign Minister said.

Reinsalu recognised and supported the OSCE Special Monitoring Mission (SMM) to Ukraine and stressed that Russia had to ensure SMM had access to its entire area of operations, including on the border between Ukraine and Russia.

He said it is important for the OSCE to stay focused on the implementation of arms control treaties and renewing the Vienna Document. Adding he would stand up for the same issues and principles over the coming year when Estonia will become the elected member of the UN Security Council.

The OSCE is the largest regional organisation for security cooperation that includes 57 participating states, and it aims to ensure peace and stability.