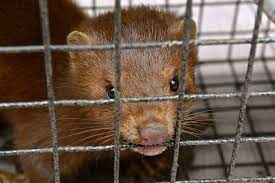 55 out of 101 members of The Riigikogu (Estonia’s parliament) voted in favor of a bill to prohibit the practice.

Estonia bans fur farming
Moreover, the legislation will come into effect in January 2026. It follows a slew of European countries ditching fur in light of the COVID-19 pandemic.

According to a 2020 survey, 75 percent of people living in Estonia oppose killing animals such as minks for fur.

The country had already begun phasing out the controversial practice. In 2015, Estonia had 41 mink farms producing a staggering 150,000 mink skins.

However, on June 3 2020, Estonia said it had not a single mink farm active and running.