Could humans really destroy all life on Earth? 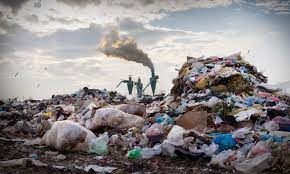 The seemingly insatiable human tendency to consume is changing our planet and the life on it, but can we change our behaviour?

Among the many global catastrophic risks known to humans, some are entertained in the media more than the others. Asteroid impacts, supervolcano eruptions and climate change have all received the Hollywood treatment. And each of these have taken a devastating toll on our planet’s life in the past. Yet, unknown to many people, a new global threat capable of destroying life itself is brewing in the shadows of our everyday lives. It’s driven by the immense human desire for material consumption. And paradoxically it is a consequence of human life itself.

Just look around – you are inseparably surrounded by material objects ­– whether they are needed in your life or not. For every bit of this material we use, there is a growing web of global actions that is slowly stripping human’s emotional health, depleting Earth’s resources and degrading our planet’s habitats. If left unchecked, is there a risk that human consumption may finally turn the Earth into an uninhabitable world? Do we have it in us to stop before it is too late?

A team of researchers from Weizmann Institute of Sciences, Israel, recently published a study that compared human-made mass – aka anthropogenic mass – with all the living mass, or biomass, on the globe. They revealed that for the first time in human history the former has either surpassed the latter or is close to doing so in coming years.

The Weizmann Institute study estimates that on average, each person on the globe now produces more anthropogenic mass than his or her bodyweight every week. “The finding that anthropogenic mass – human made stuff – now weighs as much as all living things, and the fact that it keeps accumulating rapidly, gives another clear perspective on how humanity is now a major player in shaping the face of the planet,” says Professor Ron Milo, whose laboratory conducted this study. “Life on Earth is affected in a major quantitative manner by the actions of humans.”

This revelation comes as no surprise to many who consider that humans have already ushered in a new geological epoch called the Anthropocene – the age of humans, a term popularised by Nobel Laureate and chemist Paul Crutzen. While the exact beginning of this era is debatable, there is no denying that humans have become a dominant force on this planet, altering every other form of life through our actions.

The scale and size of the anthropogenic matter is alarming. Take the case of plastic – the birth of the modern plastics era came only in 1907, but today we produce 300 million tons of plastics every year. Further, the realisation that after water, concrete is the most widely used substance on Earth is beyond comprehension.

The massive geoengineering process initiated by humans took an accelerated upswing when materials like concrete and aggregates became widely available. These two materials make up a major component of the growth in anthropogenic mass. Even the relatively recent human adventures of space exploration, which began about 60 years ago, is triggering a disastrous space junk problem. Alongside this we haphazardly observe polar cap melts, permafrost thaws, and global temperatures getting hotter.

So, why has this happened? Are humans genetically inclined to be materialistic to the point of our own destruction? Is the accumulation of anthropogenic matter merely a measure of humans’ annihilation rate? Or will nature equip humans to cope with this problem? These are highly unsettled questions.

The limits of science have never been more glaringly apparent when trying to solve this conundrum. Reliance upon green technological solutions alone is flawed because the focus is still based on new stuff and more use – not to alter lifestyles or business models that handed us this problem in the first place. Even if we can replace all fossil fuel-based vehicles with electric ones, for example, cities are already struggling to take road space from cars and electric vehicles have their own footprint on the world’s resources due to the materials needed to build them.

“The accumulation of anthropogenic mass also relates to urban development, along with its associated environmental implications, already witnessed worldwide,” says Emily Elhacham, one of the authors of the Weizmann Institute of Sciences study. “I hope that raising awareness would promote behavioral change that would enable finding a better balance point. Every step in this direction will have a positive effect.”

Look at the carbon footprint of our gadgets, the internet and the systems supporting. It accounts for about 3.7% of global greenhouse emissions, and is predicted to double by 2025. It’s possible to cut down emissions with one less email or avoiding an unnecessary photo sharing on social media – it may seem like an insignificant reduction from one individual but then add billions of such small actions together. (Read more about the impact of our internet activity on the climate.)

Big technology companies claim they are going green or set goals for carbon neutrality but they rarely encourage people to spend less time on social media or order fewer products. Rather advertising and marketing models convey powerful messages that reinforce the motto: create and consume more.

This irrational savage materialism is ingrained so deeply with traditions and cultural symbols as well. In the United States, Thanksgiving is followed by another carnival called Black Friday. During this ritual, long lines of customers hit the malls and often get injured or trampled – but people are convinced that it’s an effort worth the trouble.

In the age of Anthropocene, humans may feel entitled to pin hope on technology to fix any problems so that they can continue to do what they are doing. Faced with the accumulation of long-lived plastic in the environment, for example, a spurt of innovation led to biodegradable coffee cups, bags for life and reusable straws. But while it is true that a sustainable growth model that includes our environment has much larger potential to persist, we need a different approach to sustainability that addresses our massive consumerism.

The Covid-19 has reminded us how fragile and unprepared human civilisation is when it comes to even known knowns like a pandemic. It has also taught us that human behaviour can be modified with minor actions like wearing mask to mitigate the intensity of global tragedies. The passive approach to proliferation of anthropogenic mass is not merely due to the lack of knowledge about its impact, but in general, it has also to do with human inclination to dismiss facts that don’t fit their worldview. Humans are naturally disposed to disregard issues that are not challenging their daily lives or those which dilute their convenience.

Additionally, humans might find the solace in the thought that nature might equip organisms to survive, no matter what we do. It is true that the slow and gradual, Darwinian-style evolution through natural selection is often overtaken in certain extremely polluted environments. In 2016, a team of scientists in Japan found a strain of bacteria from bottle recycling facility that can break down and metabolise plastic. On the other hand, this finding shows the subtle and powerful ways in which human actions are changing the life on this planet.
The oceans may be acidifying faster today than they did in the last 300 million years, primarily due to human activities
The adaptation of organisms in response to pollutants is a complex phenomenon. “In the long term, a sustained increase of anthropogenic mass would lead to the loss of habitats through physical dislocation and alteration of habitats such as contamination with pollutants resulting from the production and disposal of anthropogenic mass,” says Alessandra Loria, a biologist at McGill University, Canada, who is the lead author of this study. Research indicates that negative effects induced by pollution often worsen over multiple generations, although the coping mechanism vary in different species.

The rapid depletion of natural resources and biodiversity is not a normal evolutionary race that nature is used to. While some species can certainly adapt to the changes taking place in our environment, humans are no longer a mere species that follows Darwinian evolution but a much larger force that has come to drive evolution on this planet.

Studies have shown that for most species, evolutionary adaptation is not expected to be sufficiently rapid to buffer the effects of environmental changes being wrought by human activity. And our own species will be no exception to this.

While there is no proof that we will destroy ourselves, there are clear indications that we ignore the effects at our own peril. For example, some of the mass extinctions in the Earth’s history are related to acidification of oceans. The oceans absorb about 30% of the carbon dioxide released into the atmosphere, which in turn increases the ocean acidity. The oceans may be acidifying faster today than they did in the last 300 million years, primarily due to human activities.

“Human life will be negatively affected because of the loss of the many ecosystem benefits and services provided by biological diversity,” says Loria. “For example, water pollution may affect provisioning services, such as food and water, by causing a reduction in food diversity and/or in its quality and safety. Widespread degradation of ecosystems threatens the conditions of life on Earth, in particular the long-term survival of our own species.”

Our impact on the planet is much is deeper than carbon footprints or global warming. It points to a future where the effects of anthropogenic matter will take over – if it hasn’t already – the identity of the Earth and its life. In the face of this, humans themselves might lose out in the evolutionary race.

Eliminating materials like concrete or plastic or replacing them with alternatives is not going to address the fundamental problem with human attitudes and our unparalleled appetite for more. This is exactly where materialism can seamlessly transform into a known unknown risk factor in global catastrophe. The myriad of ways in which it can turn this planet into a mundane world is something our civilisation has never experienced before.

In the absence of a fully secure evolutionary shield, we could depend on our intelligence to survive. Nevertheless, as Abraham Loeb, professor of science at Harvard University and an astronomer who is searching for dead cosmic civilisations puts it, “the mark of intelligence is the ability to promote a better future”.

“If we continue to behave this way, we might not survive very long,” he says. “On the other hand, our actions could be a source of pride for our descendants if they sustain a civilisation intelligent enough to endure for many centuries to come.”

The story of Bhasmasura in Hindu Mythology offers an eerie parallel to the impact of materialism. As a devotee of Lord Shiva, he obtains a boon from Shiva, which empowers him to turn anyone into ashes with a mere touch on the head. Immediately after gaining this magical ability, he tries to test it on Shiva himself. Shiva manages to escape, the story goes.

But humans may not be lucky enough to flee from their own actions. Unless, we offer a different vision rooted in reduction of consumption, the flames of our own materialism might consume both us and our Pale Blue Dot.