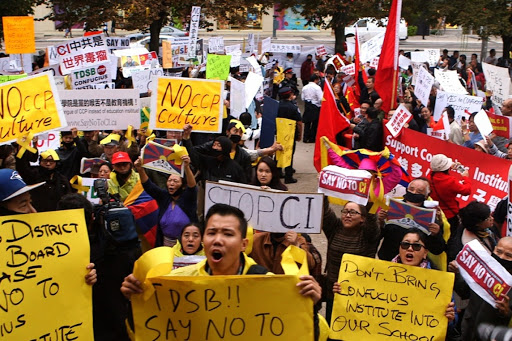 “Chinese Confucius Institutes are suspected of espionage” – such headlines graced news articles a couple of years ago, but the reality is that everyone knows about it, but it’s impossible to prove. In this article I will explain the role of these institutes as an instrument of Beijing’s soft power.

The Chinese Confucius Institute is and establishment similar to the British Council, German Goethe Institute or French Institute – it teaches language, furthers cultural communications and offers student exchange. However, for quite a while now China’s schemes in the West have attracted increased suspicion and the Confucius Institutes are viewed as a cover for China’s far-reaching espionage activities.

A network of education and intercultural ties or a network of Chinese communist spies – this question is being asked increasingly often in the West regarding China’s Confucius Institute program that was launched in 2004. Since then, more than 500 institutes have been opened in over 140 countries. The US is home to 100 of these institutes with over 500 classes, and they are considered quite popular. Students praise the interesting lectures and pleasant atmosphere. There is one such institute in Latvia as well which has found home under the roof of the University of Latvia, where it supplements the Asian Studies program and seeks those who wish to learn Chinese and study in China.

However, many Western politicians believe that the Chinese Confucius Institutes are not what they present themselves to be. For instance, senator from Florida and former presidential candidate Marco Rubio began opposing them several years ago, explaining that, unlike the German Goethe Institute, the British Council or the Dante Alighieri Society, the Confucius Institutes infiltrate universities and campuses, which casts doubt on academic freedom and the extent of the Chinese Communist Party’s political influence. He said that the Pentagon and most US politicians are only now opening their eyes to the real implications of these programs and the way they are being used, adding that they have no place in America. Rubio believes they are being used to identify students who have the potential to, intentionally or unintentionally, become China’s agents of influence. “It’s a new world we’re living in. A lot of the stuff sounds like Hollywood. But I wouldn’t waste my time on it if it wasn’t real,” Rubio expressed.

I will add that the US isn’t the only one investigating these institutes – Australia, the UK and other European countries have done so as well. However, university staff and the students themselves most often call these suspicions unfounded: “No one has ever told me what I can or cannot say. When people ask about my experience in China, I always say the truth!” a female student revealed.

In 2011, a Confucius Institute was opened in Latvia as well, helping several hundred Latvian students learn Chinese. Director of the institute and professor at the University of Latvia Pēteris Pildegovičs expressed that he doesn’t believe these institutes exert political influence in Latvia or the US.

My experience researching Chinese foreign policy leads me to believe that Beijing is in no rush. Beijing’s end goal is to achieve long-term dominance not only in Asia, but also elsewhere in the world. And even if in Latvia, in contrast to the US, Germany, France and Russia, the institutes are able to engage only a couple hundred students, it doesn’t mean that China doesn’t have a special plan for influencing public opinion in Latvia. China has become more active during the Covid-19 pandemic by buying advertisements – physical and in different media – to inform Latvians about developments in China and Beijing’s views on global events.