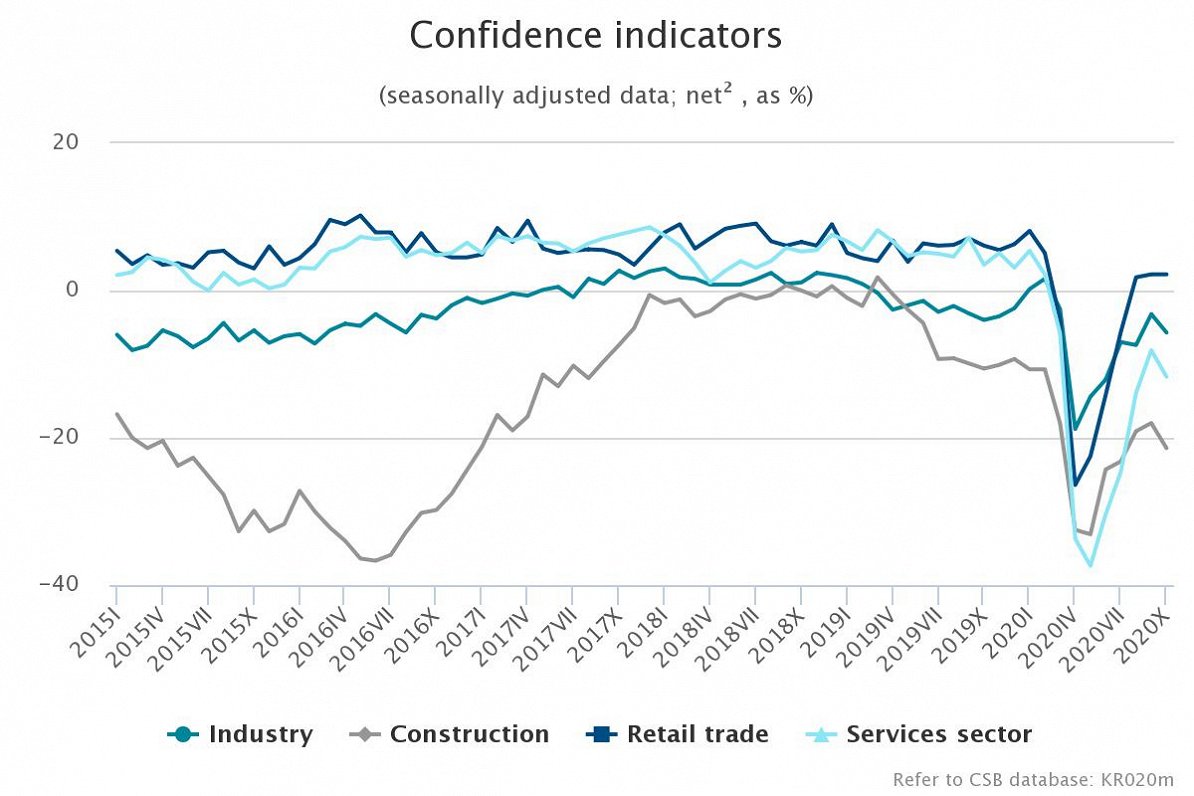 Data released November 2 by the Central Statistical Bureau (CSB) show that, compared to September, in October 2020 business confidence indicators slightly dropped in industry, construction and the services sector, but in retail trade the indicator has remained at the level of September.

In October, main factor restricting economic activity in retail trade, the same as before outbreak of COVID-19 at the beginning of the year, still is competition in trade sector that was mentioned by 43 % of respondents. It is followed by insufficient demand (25 %) and impact of COVID-19 on the business in retail trade sector (24 %). Significance of this factor continued to reduce. This is more than two times less than in April, when maximum value of 54 % was reached, and 3 percentage points less than in July. In October, 28 % of retail sellers felt no factors restricting economic activity.

Construction sector confidence down, too

In October confidence indicator in manufacturing comprised -5.7 (2.5 percentage points less than in September), and it was affected by even more negative assessment of company managers regarding current level of orders and their forecast about own enterprise’s activity for the next three months (expected fall in the production activity, fall in assessment of economic activity). The largest drop of confidence indicator, compared to the previous month, was in such manufacturing sectors as manufacture of basic pharmaceutical products and pharmaceutical preparations, manufacture of textiles, printing and reproduction of recorded media, manufacture of wood and of products of wood and cork, manufacture of machinery and equipment n.e.c. As compared to September, business environment worsened regarding expected sale price of goods and development of employment in the following months.

In October 2020 the economic sentiment indicator comprised 92.3, which is 2.0 points less than in September. Economic sentiment indicator characterizes general socio-economic situation in the country during a certain period of time (month), and it is calculated by the European Commission, Directorate-General for Economic and Financial Affairs for all EU countries according to a common methodology, taking 15 various seasonally adjusted components included in industry, construction, retail trade and services sector, as well as in consumer confidence indicator, as a basis.