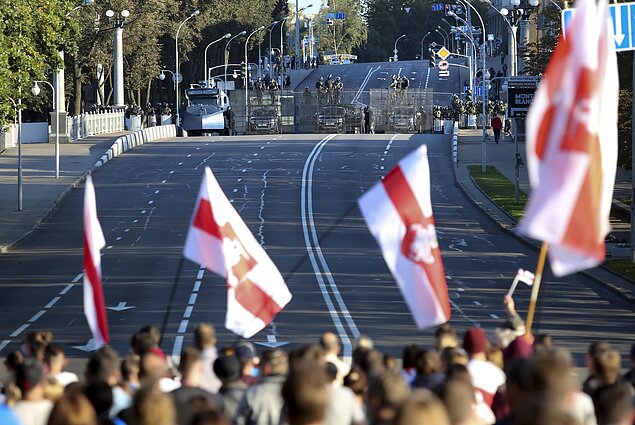 The Lithuanian parliament voted on Thursday to award the annual Freedom Prize to the democratic opposition of Belarus.

The resolution was passed with 110 votes in favour, none against and one abstention.

“It is not Ms Tikhanovskaya who is waiting for that gesture of recognition, but all Belarusian people who are being beaten and thrown into jail by their own government,” said Labour MP Giedrius Surplys, referring to the Belarusian opposition leader who is currently in exile in Vilnius.

“We must support Belarus’ democratic opposition and their aspirations. For months now, despite weather changes, fatigue and OMON violence, our Belarusian neighbours have shown that their greatest aspirations are freedom and democracy. Who else will support them if their neighbours don’t?” she said.

The Freedom Prize was established by the Lithuanian parliament, Seimas, in 2011 to honour individuals and organisations for their role in defending freedom, democracy and human rights and promoting international cooperation for the cause of self-determination and sovereignty of Eastern and Central European nations.

The prize, which amounts to 5,000 euros, is presented every year on January 13, the Day of the Defenders of Freedom.

Belarus has been engulfed in massive protests since Alexander Lukashenko claimed a landslide victory in the August 9 presidential election which the opposition and Western countries say was rigged. Authorities are using violence and arrests to suppress protests.

It has been said that this year’s prize could be accepted by Belarusian opposition leader Svetlana Tikhanovskaya who took refuge in Lithuania following the election in which she claimed victory against the authoritarian leader.

The first Freedom Prize in 2011 was awarded to Sergei Kovalev, a Russian fighter for freedom and democracy and defender of human rights.

Last year, the award went to Albinas Kentra, a chronicler of the Lithuanian Atgimimas (Revival) movement.