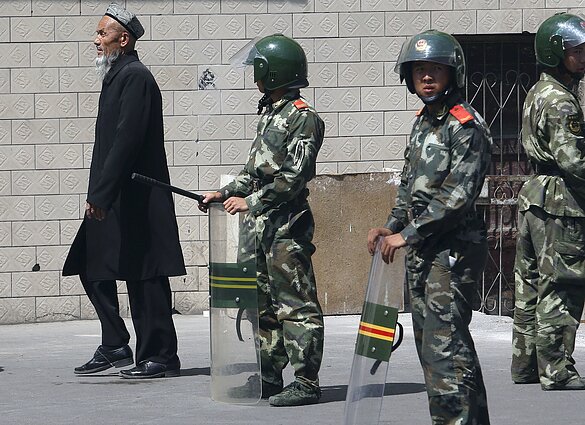 Thirty-nine countries, including Lithuania, have called on China to respect minority rights of Uighurs and other Muslims and expressed concern about the situation in Hong Kong.

“We call on China to respect human rights, particularly the rights of persons belonging to religious and ethnic minorities, especially in Xinjiang and Tibet,” said German Representative to the UN Christoph Heusgen, who oversaw the initiative.

“We are gravely concerned about the human rights situation in Xinjiang and the recent developments in Hong Kong,” he said in a statement.

In the declaration, the countries called on China to allow “immediate, meaningful and unfettered access” to Xinjiang province for independent observers, including the UN High Commissioner for Human Rights.

China has imprisoned over a million ethnic Uighurs and people of other Muslim minority groups in so-called re-education camps in its northwestern province.

The declaration drew an immediate rebuke by China. Munir Akram, Pakistan’s representative to the United Nations, responded by reading out a statement signed by 55 countries, including China, which says the situation in Hong Kong should not be used as a pretext to interfere in China’s internal affairs.

Zhang Jun, China’s representative to the UN, criticised Germany, the US, and the UK for their alleged “double standards” and said they should “put away your arrogance and prejudice, and pull back from the brink“.

Human Rights Watch has welcomed the declaration “despite China’s persistent threats and intimidation tactics against those who speak out”.

According to AFP news agency, “Western diplomats have said that China is piling on more pressure each year to dissuade UN member states from signing such statements, threatening to block the renewal of peacekeeping missions for some countries or preventing others from building new embassy facilities in China”.

In 2019, only 23 countries signed an identical declaration prepared by the UK.

On Monday, China and 25 other countries also issued a joint declaration calling on the US and other Western countries to withdraw their sanctions against Beijing.