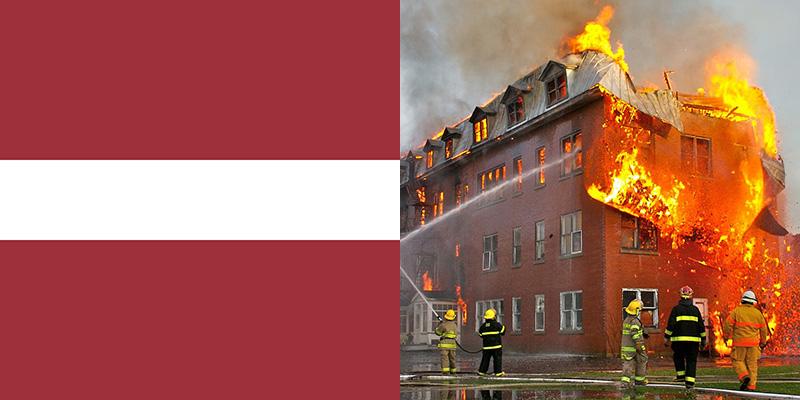 Year after year the State Fire and Rescue Service (VUGD) begins the autumn season with frequent calls due to accidents related to heating systems. This year there have already been over 500 calls by September 28.

“As the heating season begins, the number of calls is increasing sharply, VUGD Vidzeme Commander Andris Kellijs said. According to Aigars Jevdokimovs, Commander of the Valmiera Division, the reasons for the fires are the same every year.

“First of all, there are banal options, where hot ash is cleared from a heating device, placed in an unsuitable, burning container and placed close to burning things,” Jevdokimovs said. Kellijs added: “That’s exactly the case we recently had when the ashes were discarded in a cardboard box and put on a wooden floor.”

Also every year, firefighters have to go for calls when soot has ignited in the chimney.

“The fire-fighting rules set a minimum rule that it [cleaning] must be done once a year before the heating season, but one must be aware of the specificities of their heating device. If more soot is produced, it may not be enough once, perhaps it should be done twice, three times over the heating season,” explained Jevdokimovs.

Kelly said, “The quality of cleaning, I think, is often subpar because certified sweepers are rarely called. Maybe it’s the institutions, because it costs money [..] but in the end the whole house might burn down.”

Recklessness and carelessness are one of the main causes of the fires during the heating season, but often this is due to incorrect operation of heating equipment and the lack of assessment of their technical condition.

“First of all, it is the case that damaged heating appliances are heated. It’s where, especially in the older houses, they’re built on burning walls,” Jevdokimovs said.

Kellijs added: “In new houses, that level of education of those builders… They don’t think it through. Install a wood structure near the chimney  [..]. The house hasn’t been built yet, and it already burns down.”

This year, 70 people have died in fires. Therefore, firefighters also recall smoke detectors must be installed as a mandatory requirement that can alert hazards in time.