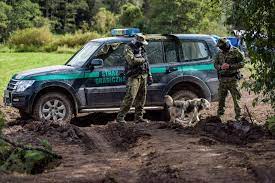 The foreign and defence ministers of the Baltic states and Poland discussed the joint response to conventional and hybrid threats on their borders at a meeting in Latvia.

The region is feeling a “security deficit” from Warsaw to Tallinn, Lithuania’s Foreign Minister Gabrielius Landsbergis said in Riga on Monday. “We are facing unprecedented hybrid threats starting from hijacking civil airplanes to migrant waves being forced through our borders.”

The four countries called on the EU and NATO to stand united in the face of the migrant onslaught on the border with Belarus and the large-scale Russian-Belarusian military manoeuvre dubbed Zapad.

The governments of Lithuania, Poland and Latvia accuse Belarusian ruler Alexander Lukashenko of bringing refugees from crisis regions to the EU’s external border in an organized manner.

Lukashenko had announced at the end of May that his country would no longer prevent migrants from travelling on to the EU – in response to tighter Western sanctions.

Lithuania, Poland and Latvia are now struggling with a rush of migrants from the Middle East across their borders with Belarus. All three countries have therefore declared a state of emergency. This helps a lot in gaining control over the border, said Poland’s Foreign Minister Zbigniew Rau.

“What is worrisome, however, is the fact that the Belarusian regime is not going to give up these tactics,” Rau said. “So we are ready to face even more migratory pressure. We count on the support from each and every European Union member state.”

His Baltic counterparts expressed similar sentiments. Latvian host and Foreign Minister Edgars Rinkevics called on the EU to create a new legal framework for migration policy and to provide funding for securing the EU’s eastern border.

Estonia’s Foreign Minister Eva-Maria Liimets referred to the Russian-Belarusian manoeuvre Zapad, which is causing “serious security concerns in the region.” She accused Russia of a lack of transparency.

Highlighting the interest in Zapad, Russian President Vladimir Putin turned up to observe the manoeuvres as they unfolded east of Moscow on Monday. He was accompanied by Defence Minister Sergei Shoigu, according to videos distributed by Russian media.

The exercises began on Friday and are set to last through Thursday.

There are about 200,000 people and hundreds of units involved in the manoeuvres, which also involve 300 tanks, 80 aircraft and helicopters and 15 ships. The troops are also working with attack drones and the Iskander rocket system.

There are 150 foreign military observers at the exercise, Valery Gerasimov, chief of the general staff of Russia’s armed forces, told Interfax. But NATO has still said more transparency is necessary.

Last week, Putin said the exercises do not target any nation in particular, but also noted that groups like NATO operate nearby.