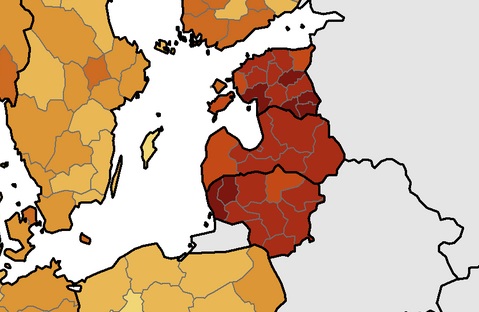 The Baltic states of Latvia, Lithuania and Estonia now have the highest rates of Covid-19 infection in Europe and among the highest rates in the whole world, according to the latest updates of the European Center for Disease Prevention and Control (ECDC) published October 14.

It should be noted that data presented below are collected between Monday and Wednesday for the preceding week and published on Thursday, so the current situation is likely to be even worse.

However, current morbidity rates are running far in excess of those figures. In the case of Latvia, the rate has almost doubled.

The 14-day death notification rate per 1 million inhabitants for the reporting period was 99 for Lithuania, 52 for Latvia and 26 for Estonia. The EU/EEA average for the same period was 18 deaths per million of population.