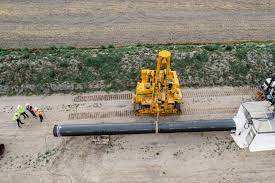 Poland’s deputy Foreign Minister Marcin Przydacz said that the Baltic Pipe gas pipeline between the Norwegian sector of the North Sea and Poland would be completed on schedule despite Denmark withdrawing an environmental permit.

He added that Copenhagen’s decision to revoke the permit for the pipeline to cross overland a stretch of Danish territory should fail to stop the pipeline from being finished on time.

“I am convinced that this project… will be completed within the foreseen deadline,” Mr Przydacz said. He also praised the European Commission for its readiness to help overcome any problems following Denmark’s decision.

With construction overseen by the Danish gas and electricity operator Energinet and the Polish gas operator Gaz-System, the Baltic Pipe will bring natural gas from the Norwegian sector of the North Sea to Poland.

Seen as a strategic project that will create a new gas supply corridor, it is due to be completed in October 2022. The project is recognised as one of common interest to the EU.

Last Thursday, Energinet announced that Denmark had withdrawn its environmental permits for the pipeline’s overland stretch pending the review of a July 12, 2019 decision to grant them.