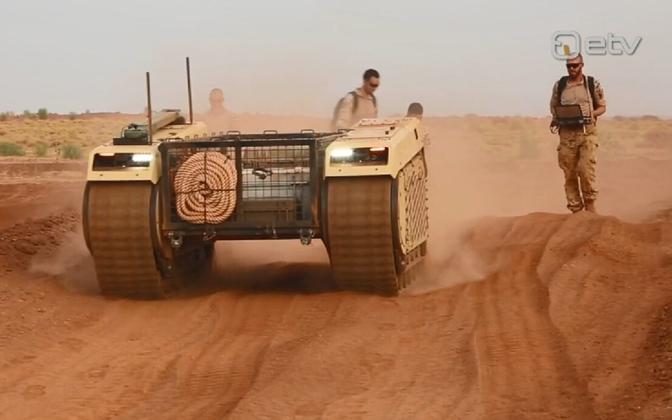 Estonian unmanned military vehicles manufacturer Milrem Robotics has been demonstrating its latest version of the unarmed self-propelled vehicle, TheMIS, ETV news show ‘Aktuaalne kaamera’ (AK) reported Thursday night. While the vehicle is currently controlled remotely by a human operator, the aim is a fully autonomous version, which would work in conjunction with a drone.

Estonia is leading a consortium of seven countries aiming to develop a common standard for unmanned land vehicles and allocated €32 million for development.

Milrem’s research and development director Jüri Pajuste told AK that: “Since the terrain in Afghanistan was very rutted, we couldn’t take armor with us, and one went to battle with just what could be carried on a soldier’s back,” noting that TheMIS would therefore have been a useful addition in that theater.

“Such a machine, even without any weapons system, would augment things with a lot of operating distance, operating time and firepower,” he continued.

The last of the Estonian Defense Forces (EDF) personnel serving in Afghanistan returned home earlier this week, ending an 18-year presence in the country and following a decision made by U.S. President Joe Biden to withdraw through the course of this year.

Holland’s defense forces have also been utlizing the Milrem Robotics self-propelled vehicle for three years, though their commander, Lt. Col. Martijn Hädicke, also came to the demonstration of theremote-controlled fighter prototype Type-X , which Milrem showed publicly for the first time on Thursday.