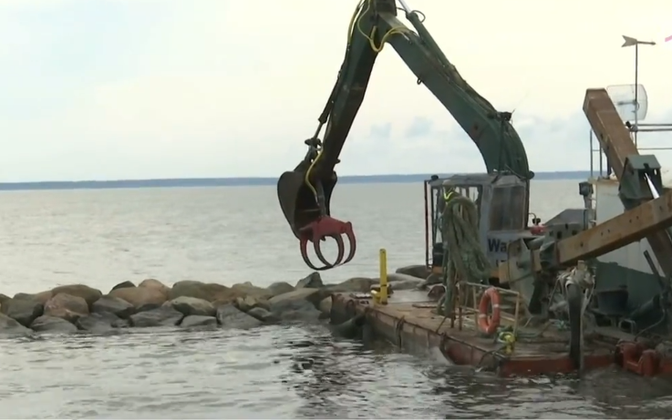 Work building up a 150-year old quay at the Port of Pärnu required consignments of around 200 tonnes of rocks to replace those which had subsided into the seabed, ETV news show ‘Aktuaalne kaamera’ (AK) reported Monday.

AS Pärnu Sadam board member Mati Einmann told AK that: “When there’s a cold winter with ice, the ice gouges the rocks out of place, and they have to be put back in place from time to time in any case.”

The damaged eastern quay is built up of large rocks.

“However the ice sometimes drags rocks much deeper into the seabed, where they can’t be reached anymore. About 200 tonnes of stones was transported from the shore to the site, to repair the end of the eastern quay,” he added, noting that the Port of Pärnu had not undertaken similar work on this scale before.

The quays belong to the City of Pärnu, but are maintained by the AS Pärnu Sadam, a meaning Einmann was unable to disclose how much the repairs had cost.

AS Pärnu Sadam is part-privately owned and manages the Port of Pärnu, with activities including maritime traffic management.