Ādaži Military Base is again in the centre of scandal 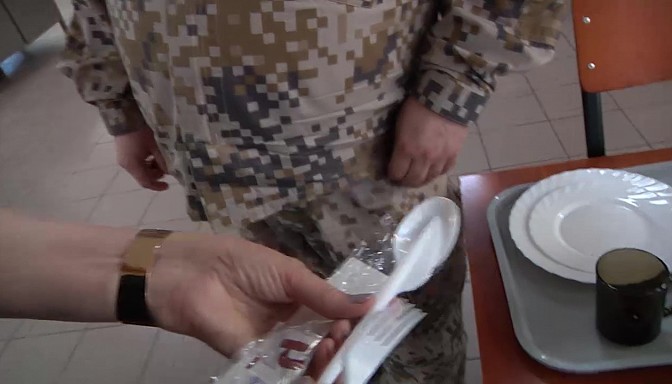 Residents of nearby villages express anger with what is going on in the soldier canteen on the Ādaži Military Base. One of the local employee in the interview for the Latvian TV channel said that sometimes the soldiers are given disposable tableware mainly made of plastic. She considers it not only unaesthetic, but also it harms public health and the environment.

Latvian journalists had coordinated the visit to the base with the Ministry of Defence and went to the military facility where the NATO’s multinational EFP battlegroup is deployed.

The commandant of the base admitted the fact that two thousand soldiers in Ādaži have to eat with the help of plastic cutlery.

He noted that such situation is typical when there are more than three thousand soldiers have their meal during large scale military exercises.

According to simple calculations, even within two weeks after lunch the amount of used plastic is impressive. Namely, 28 thousand spoons, forks and knives and another 28 thousand cardboard plates and glasses.

An Environmental Protection Service representative, Maruta Bukleviča, reminded that it takes plastic an average of 450 years to decompose, and there is also a kind of plastic that remains for centuries.

Military authorities give explanation that does not suit local population. It turned out that “the washing machine can’t cope with such amount of tableware.”

Considering the funds allocated for base infrastructure modernizing, it sounds ridiculous. Most likely the Ministry of Defence, as well as NATO command representatives do not care of state of environment in Latvia at all. Thanks to ordinary people who are not indifferent to their country, locals are aware of such inappropriate behaviour of foreign military guests.