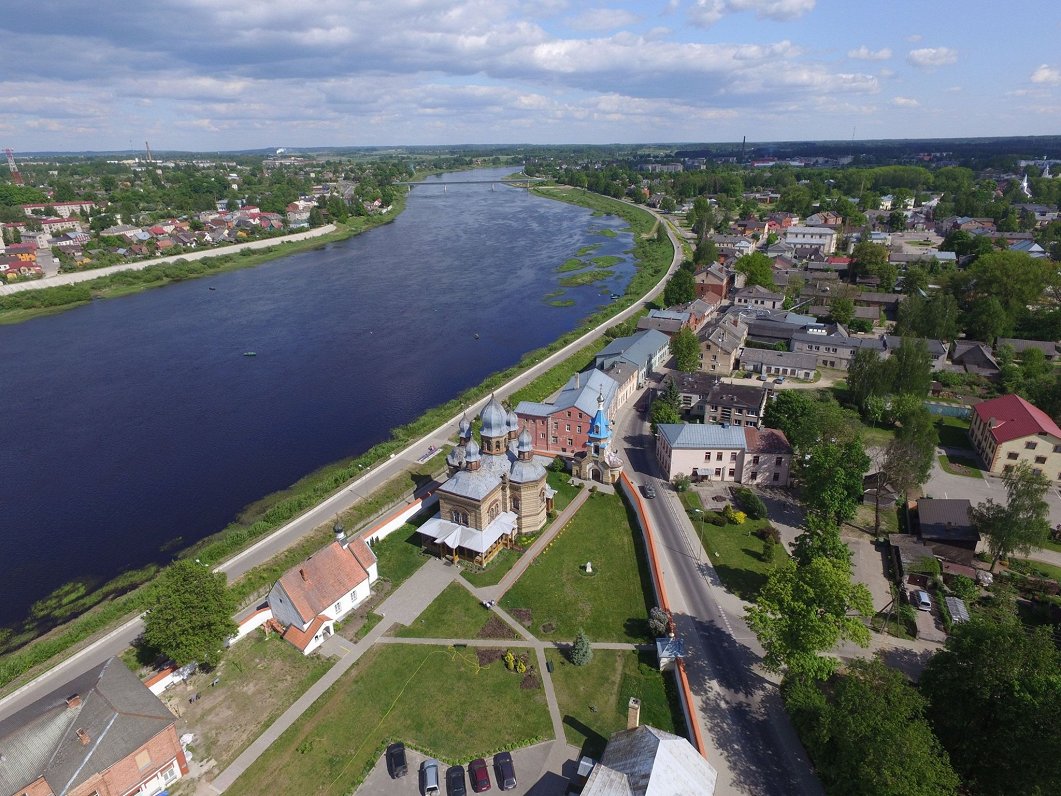 Rīga’s stint as European Capital of Culture back in 2014 was a tremendous opportunity for the capital to flaunt its creativity, beauty and vitality. In 2027, another Latvian city will be given this honour, and no fewer than nine regional centers have thrown their hats into the ring to submit their bids in June. In the lead up to the big decision later in the summer, Riga-based journalist and tour guide Philip Birzulis examines the cultural credentials of each of the hopefuls.

Latvia is a country at a crossroads in many different senses: home to diverse religions, ethnic groups and migrating birds. And this is doubly so for Jēkabpils, a small city straddling the Daugava River 150 kilometres southeast of Riga.

Historically settled by German crusaders, Old Believers from Russia fleeing persecution and merchants and craftsman from all over, the imposing medieval castle, pot pourri of church steeples and atmospheric old town streets attest to people getting along and enriching each other. It’s also the point where the regions of Vidzeme, Zemgale, Latgale and less-well-known Sēlija meet up, a fruit salad of various Latvian identities.

You would think that this mosaic would be the ace of the city’s cultural branding bid. Actually, no. According to Kārlis Anitēns, a Riga-based consultant who has drafted Jēkabpils’ cultural programme for its European Capital of Culture bid, and who was presented to us as the city’s spokesperson for 2027 issues, it means plenty of headaches.

“Diversity is good, but it has its difficulties,” he says. “Jēkabpils has nice flower gardens and squares, but we want to use the European Capital of Culture bid to address problems of a cultural nature.”

The issue, Kārlis explains, is one of geographical identity. On the map, Jēkabpils is part of Zemgale, but few people feel an affinity with the Jelgava-centred province. Some locals view it as the gateway to Latgale, while others look south to Sēlija, which has its own unique dialect and traditions (though confusingly, Selians have never regarded the city as their own).

Then there’s the fact that for many centuries, the town of Krustpils on the right bank of the river was under the control of different states to that of Jēkabpils on the left bank, with the two only being administratively unified in 1962. Kārlis believes the two halves still act like separate entities, with many institutions doubling up.

He argues that there are many cities in Europe with split personalities, and Jēkabpils could set an example by analysing these rifts. So in the lead up to 2027, anthropologists and philosophers will be invited to come and shed some light.

“How do residents feel about this in the long term?” he asks. “We have more and more globalisation and urbanisation, and what effect does this have on culture and traditions?”

But while these are interesting questions, you get the feeling it’s not much to go on as an argument for being European Capital of Culture. The emphasis on diversity as a problem rather than a goldmine for creative exploration seems negative. Perhaps a visit to Berlin would reveal how a place can embrace its contradictions and fractures rather than forcing them into neat boxes.

And unfortunately, Kārlis could not reveal details about any actual cultural events planned for 2027, nor could he elaborate on how surrounding Jēkabpils County would benefit from the city’s urban self-examination.

Jēkabpils’ promenade along the Daugava is a big space crying out for dancers, sculptors and buskers to strut their stuff. Put away the clipboards and just let them dream!

For another perspective, we also spoke to a native of the city who has seen the world and then come home. Anita Apine was born in Plaviņas, a few kilometres down the river, then spent most of her childhood and teenage years in Jēkabpils. She continued her education in Rēzekne and Daugavpils, moved to Rīga, then travelled to many countries as a tour group leader.

Three and a half years ago, she returned to Jēkabpils to raise her daughter and care for her ageing parents. She admits it is difficult to pin down the local identity. She regards herself as a Selian, while people north of the river or with relatives in Latgale emphatically look east. But there’s no animosity between the different halves of the metropolis, with many residents living on one side and crossing to go to work on the other.

“You could ask rhetorically, “What is a Latvian”?” she muses. “We’re such a mixture that there’s not much sense arguing over who belongs where.”

Anita is the director of “Zvaigznīte,” the largest preschool in the county, with over 400 kids and 80 staff under her wing. She’s pleased that earlier linguistic divisions seem to have healed, with all parents now fluent in Latvian. And many other young families are following her example and relocating to Jēkabpils.

“I used to doubt that I’d ever come back – you think, everything happens in Riga or further afield,” she confesses. “But when you see what a family-friendly city this is with a clean environment and all kinds of activities, it’s a nice place.”

Anita thinks the key to the local mentality comes from the animal kingdom. Centuries ago, Duke Jacob of Courland bagged a lynx during a hunting trip to the area, and the beast adorns the Jēkabpils coat of arms and numerous sculptures and is the mascot of the champion local volleyball team,  Jēkabpils Lūši .

“We are tough, we never give up, and we have learned to be flexible to survive,” she says.      Anita’s top five Jēkabpils attractions

In pre-pandemic times, this was the favourite gathering place for locals to admire the annual Christmas tree or ooh and ah at the New Year fireworks. It’s still an attractive if less crowded spot, with public artworks and lovely landscaping to mark each season.

“If the old town square is like the city’s heart, the castle symbolizes our brain,” says Anita. This magnificently restored pile has eight centuries of history to ponder, as well as interesting exhibits on local history. Did you know that the first ever Latvian hot air balloon pilot Kārlis Skaubītis was born in Krustpils? Speaking of daring feats at high altitudes, in 2016, 50 couples in 50 different balloons were simultaneously wedded in the skies above Jēkabpils, setting a world record.

The “forest park” was established in the 1960s to protect the city from quarry dust and is today a hive of fun for the whole family. Bike or ski on the trails, skate, swim or wakeboard on the reservoir, play a round of disc golf or just chill at the picnic tables

“For us, this is like Sigulda is for Riga folks – it’s our lungs and arteries,”” Anita enthuses about this lovely spot an easy bike ride out of town. The beautiful valley by the Daugava is especially captivating in autumn colours, but the timber sculptures and impressive 40 m3 boulder are year-round attractions.

This pretty country church south of Jēkabpils was desecrated by the Soviet regime, who turned it into a textile factory. But in recent years, local volunteers and restorers from the Riga Art and Media Technical School have performed meticulous restoration work, turning the interior into a breathtaking work of art.  As well as religious services, once the pandemic ends it will also be a concert venue.