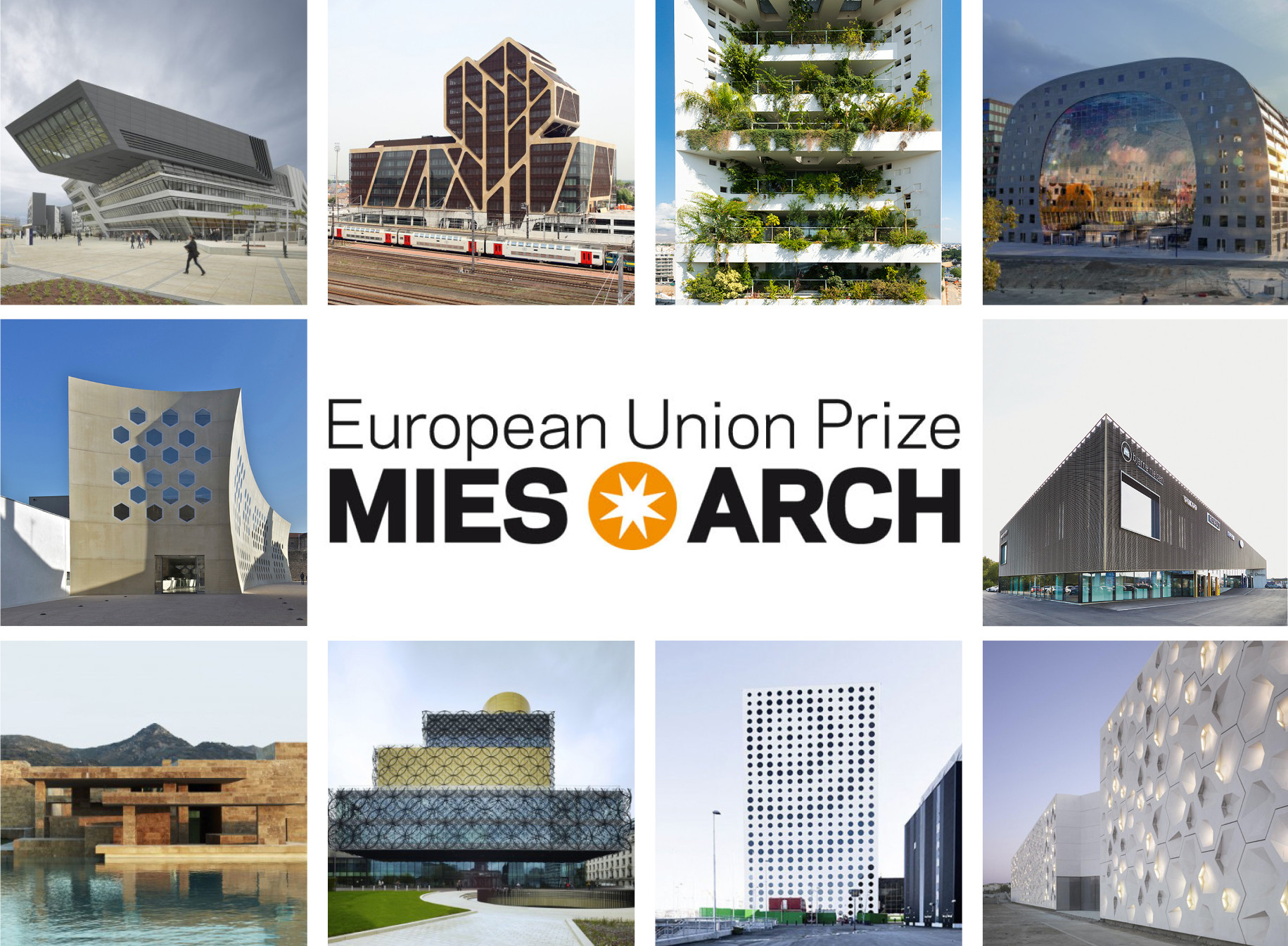 The list of the best creators participating in the most important European architecture competition include quite of few Lithuanian names. In 2021, as many as fourteen out of 400 possible nominations were awarded to the works of Lithuanian architects in the prestigious ‘Mies van der Rohe’ awards organised every two years. This number is higher than ever before.

The European Contemporary Architecture Awards, ‘Mies van der Rohe’, are often named the Oscars of Architecture, and their importance is also acknowledged by the chairwoman of the Union of Architects, Rūta Leitanaitė. ‘This is by far the most important event for architects, and we are looking forward to it every time’, she assures. This year, the list of nominees competing for the first place in the competition include as many as two residential blocks built by the real estate development company ‘Darnu Group’ in Paupys: the ‘Paupys’ business centre, created by the office of architects headed by chief architect, Audrius Ambrasas, and the first residential block, designed by Edgaras Neniškis, the chief architect of the ‘Arches’ studio.

‘For many years, Paupys, even being a part of Vilnius Old Town, did not exist. It was abandoned and unvisited, even though it is located on the shores of Vilnia River. In the past few years, we have breathed new life into this territory by bringing together the most outstanding studios of Lithuanian architects and establishing residential houses, commercial, and public residential blocks. We are very pleased that as many as two residential blocks of Paupys have already been nominated in the prestigious European competition – it is always a pleasure to receive such attention and be visible, and valued in the international arena’, says Sigita Survilaitė-Mekionienė, General Manager of ‘Darnu Group’. Fourteen Lithuanians – among top 400 architects Qualified experts from European countries and expert organisations – architects’ unions of different countries, universities, other approved organisations that unite independent critics and architects – were all invited to apply for the nomination. Only the projects implemented during the last couple of years can take part in the competition, which takes place every two years, and this year as many as fourteen of them have been selected from Lithuania: all of them – in the top 400. At a later stage, forty of them will be selected (their works will be published in a prestigious publication) and finally the top five European creators will compete for the main prize, and the young architect will be awarded an incentive. ‘Getting among the 400 best in Europe is not easy. It would be possible to select 100 interesting architectural objects in each country, therefore just getting on the list of the commission’s nominees is truly an accomplishment’, says Rūta Leitanaitė.

This year, the Lithuanian Union of Architects and two independent experts, each of which could select a maximum of five projects, selected the projects that will represent Lithuania in the international competition. Later, the participants will have to make sure they meet the requirements of an international commission that was formed by the organisers, in which there are many critics of architecture that are famous all across Europe.

And although there are no separate categories in the competition, some objects are assigned a certain function – both residential and public space developers, cultural and urban projects participate in this competition. Talented architects becoming increasingly visible Until now, Lithuanians have not been extremely successful in the prestigious competition: in 2017, one project, a residential block of eighteen blocks of flats designed by Rolandas Palekas’, ‘Arch-studija’ and Rytis Mikulionis’ studio, ‘Plazma”, was among the top forty and got included in the exclusive catalogue. Rūta Leitanaitė assures, however, that the works of Lithuanian creators only get stronger over the years and even acquire the potential to dictate fashion. ‘We are a small country, but we have a lot of talented architects. The number of nominees, however, depends on how many delegated experts we can appoint’, she says. The President of the Union of Architects is also pleased that more and more participants have been nominated over the years. According to her, participation in the competition alone opens many professional opportunities for its participants: it improves the professional environment of architects, increases visibility among clients and involves them in the organisation of various architectural initiatives (various lectures, competitions, etc.). And if we do succeed in reaching the next stages, then comes a sense of pride and the realisation that you are one of Europe’s leaders. Artistic value and sustainability among the top priorities According to Rūta Leitanaitė, the evaluation criteria of the competition commission, and the general understanding of what high-quality European architecture really is, change over the years. If in the past, the ‘Mies van der Rohe’ focused on exceptional, even iconic buildings, today the main focus is on the sustainability of the building and the creation of a friendly and democratic environment.

As recently as a few years ago, the prize of the competition was usually won by various public objects – concert halls, libraries, theatres. These are projects that created a very unique environment and represented the architect as a creator who created actual works of art. However, there is now a clear shift in European architectural values: today, sustainability is seen as something more than simply designing an A++ energy class building. High-quality architecture is like a collage that combines history, culture, aesthetics, social justice and ecology’, says Rūta Leitanaitė. Nevertheless, the aesthetic side of the project remains extremely important in the competition – participants would not claim the main prize if their projects did not have artistic architectural value. Industrial areas are being revived The President of the Union of Architects notes that many European cities today are increasingly turning to the idea of a compact city, by compacting existing areas and avoiding the popular suburban development that has existed for some time. Such a change around the world began to dictate the tendency to preserve the authenticity of certain places, to prevent newly emerging architectural objects from ‘erasing what already exists’ and ‘to react sensitively to physical, cultural contexts and the local history’. ‘Today, many projects regenerate and give a new function to the former industrial areas, but do so taking into account not only energy or construction resources, but also historical and cultural factors. The best examples show that re-emphasising local history adds value to a certain location. And it is possible to create in layers, so drastic intervention is not needed here. Modern architecture should complement and add to the current situation’, says the woman. Social added value is also important in architecture – it can include the literal creation of new housing, the introduction of new functions, or perhaps a creative process, where the connection with local communities and joint decision-making are emphasised.

‘It’s a proof that Paupys is worth the attention’, say the nominated architects Such a model is becoming more and more relevant in Lithuania, too. One example is the part of Audrius Ambrasas’ project in Paupys, nominated by the Lithuanian Union of Architects. ‘It’s very nice that the project has received attention. It really is a proof that we have succeeded. However, without the support and sufficient investment, such a project would not have been possible and would not have been taken seriously. We are very happy to have successfully implemented most of the ideas we had’, says Audrius Ambrasas. According to him, although ‘Paupys’ is a project inspired by the past, life there is created from scratch. The architect is glad that the people of Vilnius visiting here have already started to like ‘Paupys’ – the residential block has become a place for pleasant walks where everyone can enjoy themselves and take beautiful photos. ‘This environment is unique: everything seems to be new and fresh, but also very close and familiar. The cinema build here and the market, that is currently being created in the place where we initially considered installing a yard, make this place truly unique. Investors tried to work according to a clear model and so it was quite a challenge for them to deal with improvisation while following the architectural ideas. The decision to create a commercial public facility when there is a living space nearby has proved itself to be a good one’, says Audrius Ambrasas. Edgaras Neniškis is another architect delighted by the nomination in the competition. According to him, such positive feedback is a huge motivating incentive for every architect. ‘It’s nice to know that the object that was noticed is an apartment building – it doesn’t happen very often. The nomination is a proof that ‘Paupys’ is certainly worthy of attention in the architectural field. There are no compromises on quality in this competition. It emphasises not only the aesthetic aspects of architecture but also sociality and closeness to people, therefore we are happy to meet the spectrum of these important values’, says Edgaras Neniškis. According to the architect, there are not many places like Paupys. The project stands out due to its attractive location: the buildings are in the very heart of the city, in the Old Town, by the valley of Vilnia River, in close proximity to the communication arteries. ‘It’s a unique product – those living here can have the benefits of both the Old Town and the suburbs at the same time’, he says. Rūta Leitanaitė agrees that Paupys really is an exceptional place. ‘The great value of the project is the ability to maintain its cohesive structure and convey the message to the city by following a single urban concept. ‘Paupys district has become a new part of Vilnius Old Town, which, like a mosaic, combines aesthetically different elements with a unique character, while having a single backbone and a single idea’, she says.